An inter-governmental initiative to strengthen institutions, policies and practices and reduce the risks of torture and ill-treatment by applying the UN Convention against Torture

The adoption of the UN Convention against Torture (UNCAT) in 1984, was a landmark in the global fight against torture and ill-treatment. The Convention underlines a fundamental principle: Torture is never, under any circumstances, justified.

Galvanized by the persistence and entrenchment use of torture and ill-treatment in many countries, the Convention against Torture Initiative – CTI – is an innovative, joint collaboration between States for States, focusing on making the UNCAT universally ratified and better implemented by 2024.

At CTI, we aspire to strengthen institutions, policies and practices for dignified and rule-based governance and to reduce and prevent the risks of torture and ill-treatment through:

The CTI is a long-term engagement to help States overcome obstacles in ratifying and implementing the Convention based on the philosophy of constructive (“no name, no shame”) dialogue, sharing of good practices and State experiences, and inspiring each other to better performance across the board. Through strong partnerships and inter State cooperation, CTI is providing coordinated and sustained support through legal and technical advice and assistance.

CTI supports governments in overcoming particular challenges standing in the way of UNCAT implementation such as gaps in resource, human capacity and technical expertise. CTI’s capacity building and other support packages are geared for ODA-recipient countries.

CTI is being spearheaded by the Governments of Chile, Denmark, Fiji, Ghana, Indonesia and Morocco, supported by a full-time Secretariat, based in Geneva. The six CTI Core States leading the initiative are engaged through their direct bilateral and multilateral diplomacy, as well as through sharing and exchanging on national practices and challenges with other governments by hosting and participating in various activities.

The CTI Secretariat provides policy and strategic advice to the CTI Core States and delivers an annual programme of activities providing capacity building and technical advice.

The Association for the Prevention of Torture (APT) is a strategic partner of the CTI, collaborating and advising the CTI on many of its activities.

The CTI’s work is encouraged and bolstered through our Group of Friends, a network based cooperation allowing for the exchange of knowledge, experience and ideas regarding how best to overcome obstacles to full implementation of UNCAT .

Learn more about the CTI Group of Friends and how to join here.

To reach its goal and objectives, CTI works by a principled framework of action consisting of three fundamental principles:

In launching the CTI  in March 2014, the Governments of Chile, Denmark, Ghana, Indonesia and Morocco appealed to fellow United Nations Member States the need to protect all persons from torture and ill-treatment – in all parts of the world. To do so would require new thinking, constructive collaboration and shared responsibilities.

Based on this vision and marking the 30th anniversary of the adoption of the UNCAT, the Foreign Ministers of Chile, Denmark, Ghana, Indonesia and Morocco launched the Convention against Torture Initiative – the CTI – on 3 March 2014 at a high level meeting during the 25th session of the Human Rights Council in Geneva.

At the 40th session of the Human Rights Council – and at the half-way milestone of the CTI and the 35th year of the Convention –  Fiji joined the CTI Core States, driving ratification and implementation in the Pacific and beyond.

Find the launch documents here: an op-ed was issued in Swiss newspaper Le Temps by the five Ministers for Foreign Affairs (for the English version click here).

Read the Core States’ statement on the 35th anniversary of the Convention here.

Read the press release of Fiji joining the Core States in 2019 here. 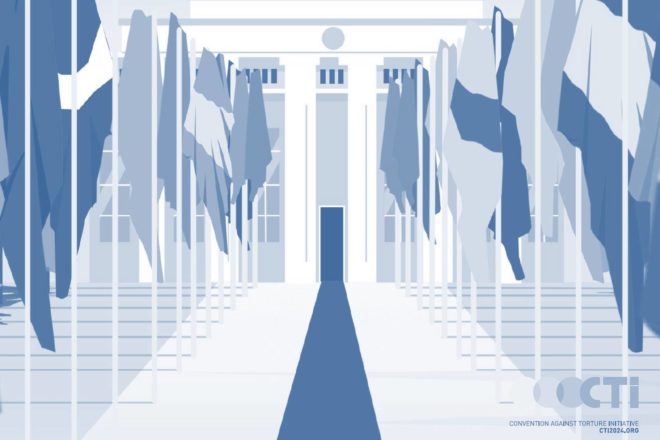